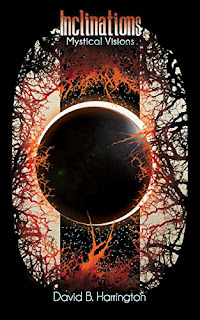 Inclinations – Mystical Visions by David B. Harrington takes you on a journey through magical lands and heavenly realms filled with wonder and adventure.

Replete with angels and mythical creatures, Inclinations – Mystical Visions is a strange and allegorical mixture of poetry and prose.

Based on a series of mystical and esoteric visions, this collection of short stories and poems covers a wide variety of themes including faith, judgment, mysticism, and spiritual warfare.

You can purchase the ebook or paperback from Amazon.


David B. Harrington is a proud resident of Portland, Oregon, where he lives with his wife and two sons. Originally from Connecticut, David moved to Portland in 1988. He is a self-proclaimed Christian Mystic and is interested in all things spiritual and metaphysical. David began writing thirty years ago and his book, Inclinations - Mystical Visions, is a collection of short visionary fiction & metaphysical/spiritual poetry based on a series of mystical and esoteric visions he’s experienced.